I am not a complete newbie at this and have built a couple of successful small steam engines and a very small boiler. However I am planning on another somewhat larger boiler to run future engines so I am having to get serious about pipe sizes and fittings. The boiler is a 3" dia upright design similar to the one that MyfordBoy describes in his series of YouTube videos. https://www.youtube.com/watch?v=MIFHILK256Q&t=14s

I believe a suitable pipe size for the output would be 3/16" however I don't have any MTP taps or dies and am little confused about sizes and method of connection to the boiler. What methods would anyone suggest and what types or fittings, taps and dies would be correct for 3/16" pipe?

Thanks for any thoughts!
Geoff
Top

So, the first choice/decision is pipe or tube... because if it were I, I would be using tube not pipe for connecting something like that. I have roughly that size of plant- the Monarch plant that I have. It uses tube, in the form of 3/16" OD tube for the steam to and from the engine, (7/8" by 7/8" single), and 1/8" for the water supply from the hand pump.

If you want to use pipe rather than tube, I can't advise you- sorry, not our gig. But tube will work, and should still be readily available in the form of copper tube in 25' coils from somewhere that will supply for brake line work, or for fridge work. Silver solder on the nipples, and do up the union nuts, and it's all good

. To get fancy, buy a tube bender to make the bends not look like dogs bollox.

I don't know where you are in the world, so can't advise on which choice is going to be best- it somewhat depends on which thread series you have taps and dies for now, and what hobby suppliers around you will use. (basically, if you are in the US then it's different than ROW which tends to be either Metric or UK based ME/Brass for fittings- there are 3 "good" choices out there)
Top

Thank you James,
I had not even thought about the difference between pipe and tube, can you explain? Happy to take your advice and go with tube, I am in the US (California). I only have a rather motley selection of taps and dies right now so looking to purchase something.
Geoff
Top

Check out P M Research, they have a selection of MPT, UST and straight taps and dies, they also have valves and fittings with MPT and UST threads. Keep in mind they are not all interchangeable.
Top

pipe is measured by the inside, tube by the outside (roughly!). Tubing typically doesn't have threaded connections on the tube, but relies on union nuts with cones of some sort on the tubing. Think classic brake lines, swageloc fittings, ect.

Pipe has threads on the outside, and is screwed together, with pipe dope used on tapered threads to make a seal between each section. Think black iron pipe

For a steam plant, in real life it will be pipe, often joined by flanged connections. For a model, it is often easier to use tube rather than pipe in smaller sizes, because the copper tube typically used is going to be thinner than iron pipe would be, and the alternative of brass pipe can mean lots of work to route. If you are building an "engine room" style of display piece more than one you intend to run, then pipework can look lovely. 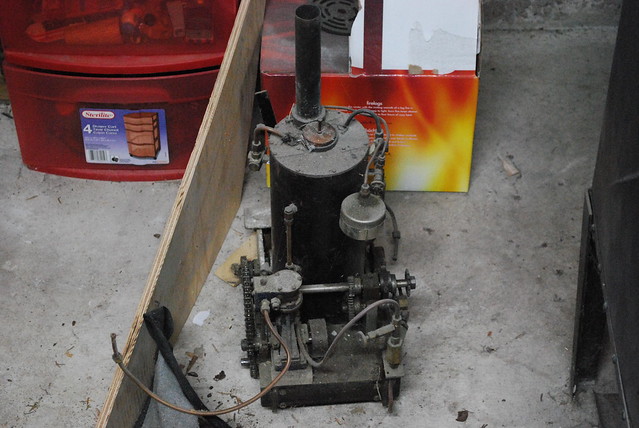 Is done with tube, and is probably a bit bigger than what you are building- the boiler shell is 4.5" OD. (THING typically has lived behind the woodstove...and might end up being the first loco run on CPS II, given that at least its feed pump works...). Note: I'm not advocating the style of looping tubes that Thing has for aesthetic value- it has all the aesthetics of a brutalist building !

In the real world, we typically would use tube up to 3/8" or perhaps 1/2", and pipe beyond that. Mostly it has to do with the ends, as in what they are connecting to, and how hard plumbed something is. More modern practice is welding tube into socket weld fittings, when the fridges were redone @ work (from R12>R575, IIRC) nearly all the pipework was done that way with a TIG welder.

As for purchasing taps and dies- it is cheaper (almost always) to purchase a set vs loose pieces. That being said, if you only need 3 taps & 1 die, then a set is a bit of overkill.

OK many thanks for all the info! The fog is starting to clear regarding fitting sizes, the tube v pipe thing explains why I was having problems understanding the way fittings are described.
Geoff
Top
Post Reply
6 posts • Page 1 of 1