Mystery rifle a guy brought me

Topical Discussions include anything pertaining to Gunsmithing. 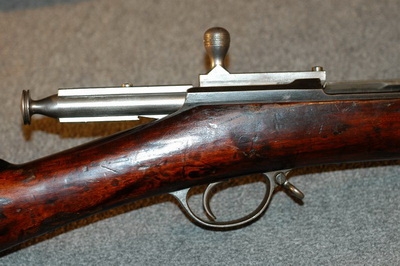 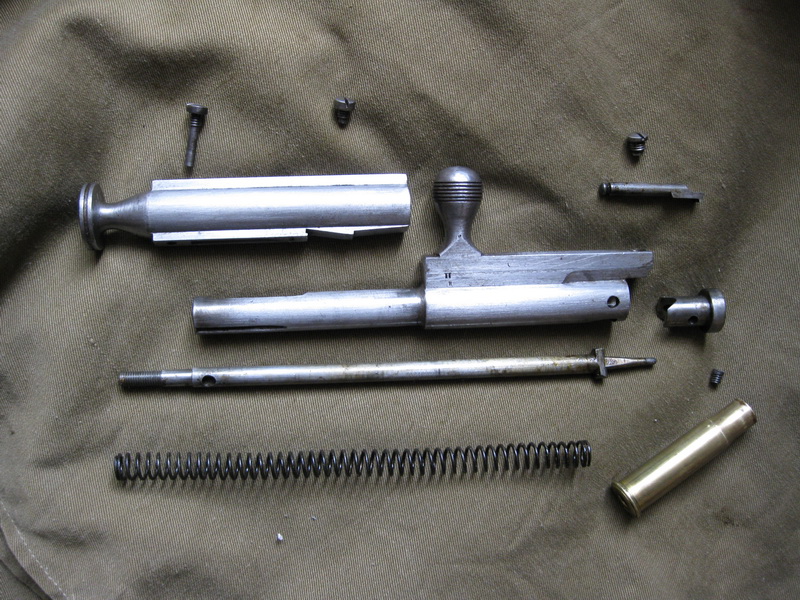 Yours "mystery rifle" does not look like any of them, so nothin russian, but bears some similarity to other bolt action single shot rifles/carbines of "Berdan № 2 era"(that is 70's of the XIX century - early 80's if you count ones fitted with a tubular magazine).

There is slight(really minor) resemblance(mainly in bolt construction) to Hotchkiss rifle and Gras Mle1874: 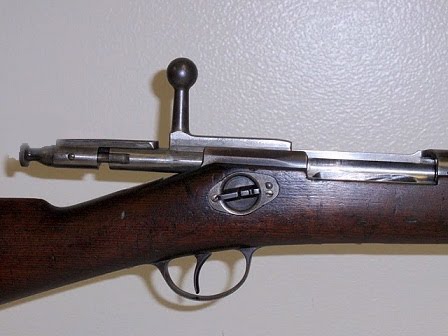 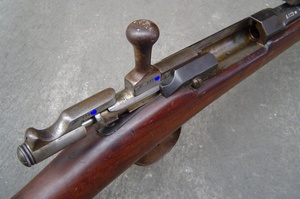 And what if it stared its life "as is"?
Especially it seems to be quite small gun (most mentioned above use ammo in "45-70 class").

I will quote kuduae from nitroexpress.com (it is about sport/schutzen/rook rifles being simplified and often miniaturized m71 mausers - I don't think it is a case, but principle is probably same)

No, Daryl. After Adolph Frohn, Suhl, designed this cartridge after 1890, it soon became the standard German centerfire target cartridge and remained so until WW2. It's main advantages were: It was available everywhere. It was easily reloadable, pre-packed powder charges and swaged lead bullets in many weights available from the ammunition companies.
So it was chambered in all types of rifles, even some combination guns and drillings are known. Tom Rowe published 2 books, "Alte Scheibenwaffen I and II", on the various German target rifle actions. Though most of them were Falling blocks like the Aydt, the various Büchels, Nimrod and so on, others were variations of the basic Martini action like the Frohn, Stahl or Kessler. Nearly all these actions were made in 8.15x46R too. Cheaper sporting rifles, used for less formal target shooting and small game hunting up to roe deer, in 8.15x46R were buit on Tell-type break-open actions and these simplified Mauser M71 type actions. If you look at the catalog pages shown by Lancaster in this thread, you find the Normalhülse = standard case 8.15x46R among most caliber offerings.
These simplified M71 type actions are not sporterized Military actions and were not made by Mauser. Instead, they were a staple of the Suhl and, even more so, the Zella-Mehlis guntrade up to WW1. Usually they omitted the M71 bolt stop screw, the sear serving as a bolt stop, and often the Mauser flag safety too. They were made by many makers there in all sizes from giant for 12 gauge Vogelbüchsen to tiny ones for pistol-sized rook and rabbit cartridges. Here is such a miniature action by Sauer & Sohn, pre-1893, in 7x20R "Z", essentially a .32 long Colt case tapered down. As you see, the action is much too small for the 8.15x46R, top photo, but would fit a .32-20, bottom.

Thanks good documentation. LeArned something !
Top

12L14 I think you may have figured it out. This thing looks a lot like that Suhl, commercial M71 type action. Thank you so much for that lead.
Lance Corporal of Marines
Top

While researching something else, I came across this reference to a Dreyse rifle that looks somewhat like the "mystery rifle" -- at least it locks on the bolt-handle base, and has a separate bolt head.

Not trying to be snarky, but to me that bears as much resemblance to a Mosin as it does to a Remington 700. And I have a Remington 700, as well as 3 Mosins.

An interesting story: The "Mosin–Nagant" name appeared in the western literature (the rifle was never called this in Russia).

The only thing of value that Nagant contributed to The 3-line rifle, Model 1891, its original official designation, was the screw that holds the cartridge follower spring in place. He also contributed to the interrupter, a feature he had "borrowed" from Mosin earlier, but this contribution is considered unnecessary to the firing of the gun.

Mosin won 200,000 Russian Rubles from the Military for the design. Nagant claimed patent rights and sued and won. Mosin could not patent the firearm because he was in the military. Rather than making Mosin give up part of the money, the Russian government gave Nagant an equal amount. The Russian people thought that was grossly undeserved and old timers in Russia hearing it called a Mosin-Nagant will adamantly tell you: "It is Mosin! Only Mosin!"
Top

mclarenross wrote:As far as I can tell the only lug at all is the bolt handle, which is soldered onto the body so i dont trust it at all.

It can be soldered and safe in the same time.

Imagine the bolt body is a shaft(with a proper channel/keyseat), and the lug is a key.
One can ommit soldering, and just bolt lug(key) to the bolt body(bolt handle - its "root" - can act as a srew), saw similar solution for recoil lugs.


ps. look at that lady's approach at lug construction (skip to 1:27)