Topical Discussions include anything pertaining to Gunsmithing.

A gauge pin was then inserted into the barrel bore and indicated concentric to the lathe spindle axis. 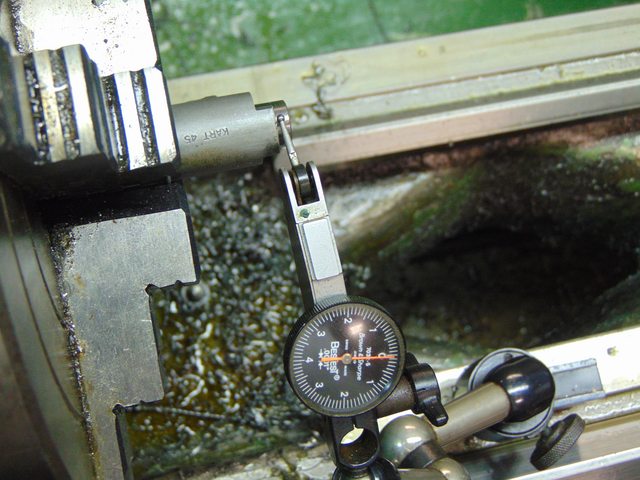 The reamer was then plunged to the desired chamber depth. 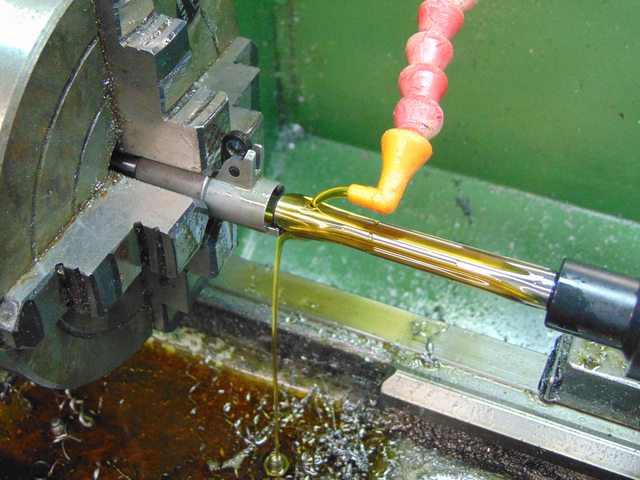 The barrel was then flipped around and the crown was cut using the same technique. 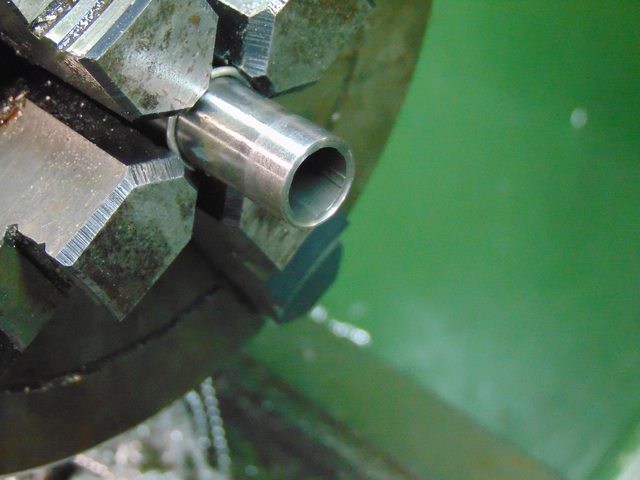 Now I just need to trim the barrel ramp back a little.
Glenn

Lots of fussy work there no doubt Glenn!
Vision is not seeing things as they are, but as they will be.
Top

Outstanding Sir.Thanks for taking the time and effort to post this thread.I notice that you are in Florida.If you don`t mind me asking,where are you located?I was born and raised in Vero Beach.A friend of mine has a little business just up the road from Vero.Knights Armament.
Good mluck.Have fun.Be safe.
Leo

People never lie so much as after a hunt,during a war or before an election.
Otto Von Bismark
Top

The slide I had used was a new Caspian slide that had been lapped by Caspian to a different frame. Although it seemed pretty good as far as the fit, I never really liked the idea of not having a properly fit slide.

I ordered a new slide from Caspian and finally received it after a bit of wait time. Fortunately, my barrel will need a bit of fitting as it is a bit too tight in the new slide. This made me happy, as my fear was that it would drop in and rattle around and I’d be welding up my barrel.

Right out of the box it went onto my slide maybe about ¼” and then got tight. That also made me happy so that proper fitting could be accomplished.

I threw it up on a surface plate and checked the rails. They are parallel to each other and to the outside of the slide within tenths. Nothing too scientific, just a gauge pin and a .0001” test indicator. 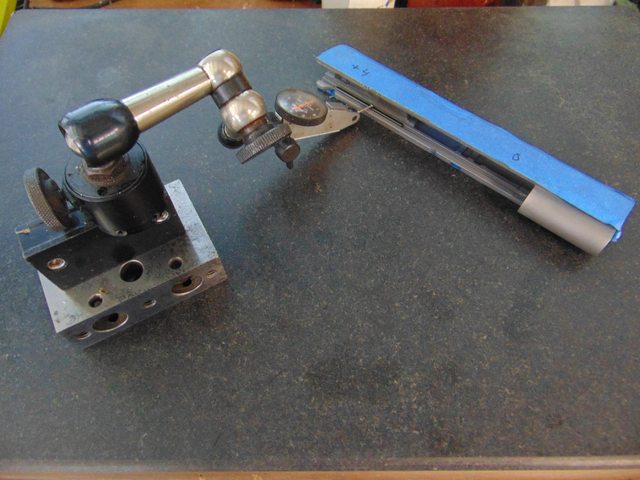 I then gauged the width between the rails and found the slide rails to be just under a thousandth narrower than my frame rails. I lubed it up and found that I could slide it onto the frame without excessive force. I also discovered that Caspian had missed the ejector cut depth by .050” so I had to remove the ejector to get full travel on the frame. At that point, I got out some JB’s Bore Shine and lapped the slide to the frame which might have taken fifteen to twenty minutes. It now has nice contact between the slide and frame rails.

Off to the milling machine to add the Marvel cut and fix the ejector groove. 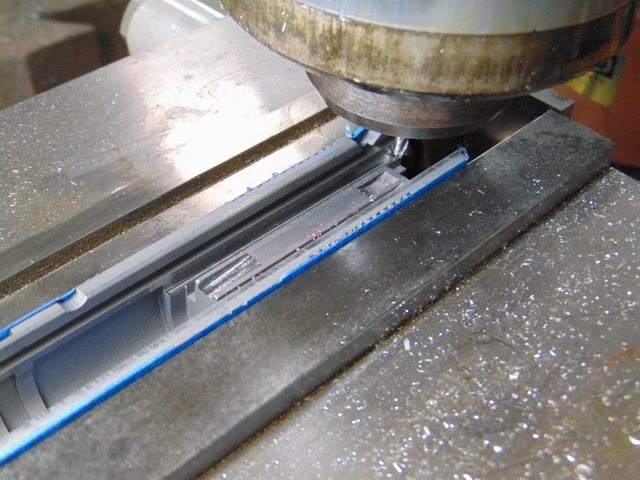 Now the slide fits over the ejector. 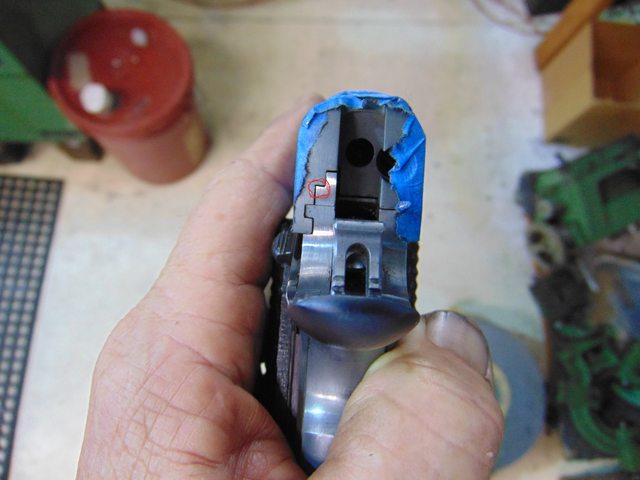 Heh! Amazing how things like that happen. Brings to mind a tool I delivered to Litton Industries, which was rejected (one of the five rejections I received in the 16 years I did work for them). For what ever reason, I had forgotten to engrave a line on the tool. That was troubling to me, as I had made the same tool before, without issue. Heavy sigh!

Nice job on the slide, Glenn.

Even more so when it is an automated process with multiple parts being made per setup. I imagine that there are a number of them like mine.

Great work Glenn! Thanks for sharing
Vision is not seeing things as they are, but as they will be.
Top

I've got sears working the way I want, so now it's time to get hammers sorted out. 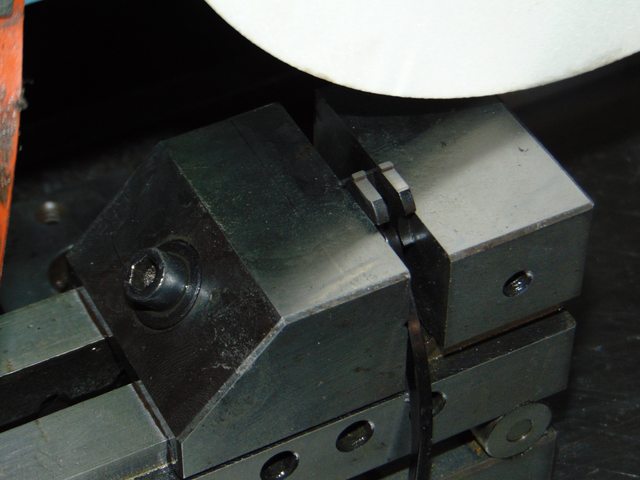 I made a quick grid plate from 4140 pre-hard Blanchard ground plate in order to make setups easier, and then used it to lower the ejection port a bit.

Then dressed a wheel to the proper radius and adjusted the barrel bed depth a bit using the surface grinder.

It seems that the plate will be quite useful for a lot of operations around here. It uses Moore toe clamps and nuts, 3/8-16 studs, 5/16 dowel pins, and fits in my vise turned either way.
Glenn

That is some very detailed work. You seem to have the proper tool for every operation, and know how to make them work.
Top

I bought a frame and slide for another 1911 over a year abo and haven't had time to tinker with it until just recently. It is from a different manufacturer and requires a bit more work even though it was quite a bit more expensive...

Grinding the frame rails was a bit more interesting, as there isn't much on the frame that is parallel or square. That required some shimming and some indicating to get the rails parallel and aligned properly.

Next, the slide rails were narrower than the frame grooves, so the slide rails had to be widened a bit. I used the CNC mill for that and did it manually since I can control the cutter movement in .0001" increments.

I started to fit the extractor and discovered a step in the wall next to the breech face. The step was high enough that a cartridge case wanted to jump up to the wider area instead of sitting flat against the breech face. I ended up scraping it down using a HSS tool bit by hand.

The extractor groove needed to be farther from the breech face so that had to be milled using a 1/16" end mill.

Did a little grinding on the claw as well.

Operating machines is perfectly safe......until you forget how dangerous it really is!
Top
Post Reply
89 posts