It looks like I have a 3-1/2” gauge Kozo A3 Switcher build in my future. I recently found a copy of the book along with a set of driver and cylinder castings for a price I couldn’t turn down. They will be shelved while I finish up some other projects but should be a fun project in a couple of years.

For all of the A3 owners and builders out there, how well do they perform? Are there any errors in the design or modifications that I should be aware of?

A new copy of Building the Pennsylvania A3 Switcher along with the castings. There are actually four drivers there. It also came with blanks for the tender trucks.

I have ridden many laps around a ground level 3.5" track behind one of these fine locos.

Not my build but have watched it mature over a few years. They run quite well but require attention to detail.

The push pull throttle is a little sensitive.. so adding a screw to hold it in a set position seems a good idea...but can be done after the fact.

Getting the firedoor open can be a challenge when you are firing on the run..which is often necessary with small locos with smallish grate area and today's lack of high quality coal.

I personally like small locos with BIG firedoors that are hinged at the bottom or have clamshell double sliding firedoors...both of which should be planned for early....

of course if you are sitting lower on an elevated track flat car this may not be as big a concern as if sitting on a box on top of a riding car on the ground.

I can sit cross legged butt down on anything on a ground track...but many people cannot and are looking down at everything

Like all small locos...they are more fun than a barrel of monkeys and a lot of work to operate successfully. You cannot just pull the throttle and go...you have to manage them.

Do not under estimate the advantage of every extra KG on the chassis. Do not try to save weight...our Tich benefitted from 3 KG of lead added between the frames..and my tom Thumb did very nicely pulling 2 people after we stretched the frame and added about 4KG to the original design.

Putting steel tires on is also a benefit toward traction..

Build it and have fun..
Too many things going on to bother listing them.
Top

The A3 switcher is an engine I've had my eye on for a while. Honestly, I haven't really considered 3-1/2" gauge until the last few years. I really like the portability and cost factor.

I will have to limit myself to high lines. My flexibility is not what it should be and having a desk job doesn't help. Maybe I need to take up yoga. I bet I'll be the only one in the class who is there to be able to ride on little trains.

I'm actually considering the merits of modifying the design to be a camelback. I think it would benefit from the larger firebox. Most of the design could be reused or modified. The tender would be unchanged along with the basic geometry of the running gear. It will be something to think about.
Top

With a wide firebox that will not fit between the drivers you may well end up with a loco that is tail heavy because of the need for a longer boiler.

Very doable but will require a bit of redesign.

I have built my last uncarrayanbe loco.

Many other people are looking back at the smaller scale for similar reasons.
Too many things going on to bother listing them.
Top

I have a set of drawings for the A5a in 1-1/2” scale. Comparing it to the A3 it looks like the driver size and wheel base are close enough to make it work. On the A5a the boiler is raised above the drivers allowing the boiler to shift forward. This shift and some added weights could solve the balance problem. It will depend on if I want to go through the effort of redesigning the A3.

I have a feeling that the smaller gauges are going to start to make a comeback. Many coming into the hobby just don’t have the space or money to dedicate to the larger scales. I also think we will see more use of 3D printers and desktop CNC in the hobby. Both of which, at this point at least, are really too small for all that much use in the larger scales but for 3/4” and under they are the perfect size.
Top

Ed Hume did an article in LS&OR in the September/October 2006 about hints and tips he discovered when building his engine. In fact, it was the very first issue of LS&OR I bought and I learned a lot from it (though I couldn't understand how he fit his train in a toaster oven... turns out it was 3.5" gauge and I was only aware of 7.25" gauge!)
"One cannot learn to swim without getting his feet wet." - Benjamin Maggi
- Building: 7.25" gauge "Sweet Pea" named "Catherine"
Top

I have to agree with Bill, that adding even a couple of lb/kg to a small 3.5" loco can make a huge difference.

I'm not sure how big the firebox is, but from experience with road steam, 6 square inches was crazy but just possible to ride behind, 9 square inches was much easier. 22 sq inches on 3.5" makes a very capable engine.

Steel tires will aid grip by about .05 on CoF. Certainly worth doing, given the limits that are played within. Tich in 3.5" gauge is a bit light, a bit small. Juliette is a better size of engine, and I'd have to assume the A5 is about that size.

I'd also add that it's far easier to have a 7.x" gauge engine that is completely unliftable, than a 5" 0-4-0 that is perhaps manageable, but really not. (not my 0-4-0-0-4-0, which is way in the "can't lift it" level...). Because the worst accidents I am aware of from lifting were from 100-200 lb engines that at one point the owner could manage, but later on (say, at 80 years old) could not, and found out via dropping the engine. I know my Britannia was dropped by its builder, and it weighs about 115 lb in its carrying case. (126 lb in its shipping case) 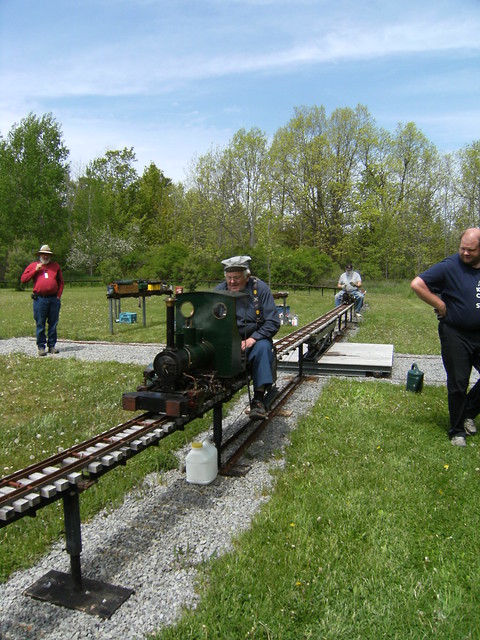 (bad sized 5" locos...that fits right in the worst of the worst, IMO...because I could still lift an end on my own, but no-one else could on their own...)

I'd go with a 50-70 lb engine as being near ideal for own use (engineer & 1 passenger), and about 120 lb for passenger pulling on raised tracks (3 passengers & engineer). When you get to that sorts of weight, the engines probably cross to 2 person lifts or mechanical aids at about 50 years old. I can still sling around Caribou, but it's no longer anything like as easy as it was 2 decades ago...

I've been quite happy with my A3, though I did redesign it to be one of the saddle tank versions the PRR built. That adds a few pounds of tank and water for traction. It will pull two adults around the St.Croix track with a 1% ruling grade.
To Bill's point on the throttle, I modified mine with the addition of spring friction sliders to hold it in position while firing on the move. It has worked great.
If you find suitable coal- I use western from the club, or some Welsh- the small firebox works fine, though it does need careful attention. 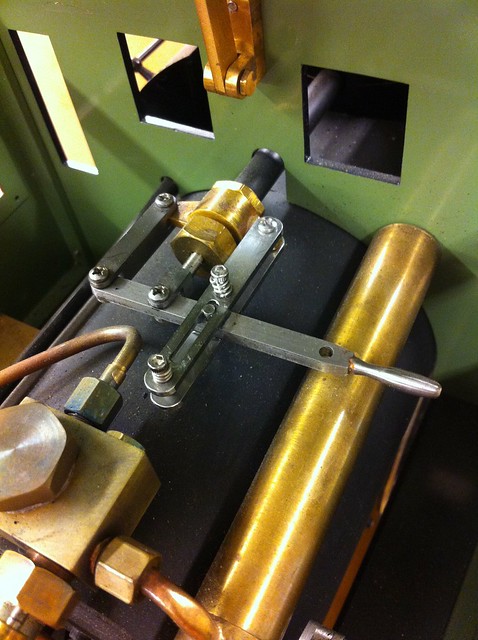