We are attempting to get a bit more performance from our 4 inch scale Clayton wagon. The builder very approximately doubled the dimensions given for the 2 inch scale Model Engineer design. The Cylinders are 2 inch bore, the stroke is 3 inches. The ports are 1 inch long by 3/16 in wide the exhaust ports are 3/8 in wide, the passages consist of 3 1/4" dia holes filed together making ovals about 1/4 in by 3/4".We are a bit out of our depth here, usually we build and run smaller models, do these dimensions seem acceptable or should they be enlarged, there is space to allow that. Regards David Powell and Eric Motton,
Top

At first glance, it seems to me like enough port area to feed a 2"x3" cylinder, but also at what RPM are these running? Most steam locomotives in 1/8th scale will be turning at about 400 RPM or less most of the time, so that may not be comparable to the speed you are trying to run. So depending on how you are using it, they may need to be bigger.

What is the wagon not doing to your satisfaction? Not enough speed? No power? loses power at speed? Excess steam consumption?

It COULD be in your exhaust. I had a medium sized 0-4-0 that used Mercer castings, and had 2"x3" cylinders on it. It got to where it didn't have any power other than at low speeds. If you tried to run it fast, it would bog down and the exhaust started to sound funny. What had happened is that soot and oil had built up and clogged off a lot of the blast pipe and nozzle, so when you tried to run it fast it couldn't get the exhaust pushed out and the cylinder had a lot of back pressure. Took that nozzle and lines off, cleaned it out good, and the locomotive performed very well after that. (I realize that snifter valves are made to prevent this type of thing and make the locomotive coast easier, but it didn't have them at the time.) Your exhaust passage size could be doing the same thing to your traction engine. And it may not be the size of the exhaust passage machined into your cylinder blocks. If you have small lines going from your cylinders to your smoke box, or you have an excessively small nozzle, it will do that.
Top

Thankyou for your interesting and helpful reply. We bought the wagon about 10 years ago and managed to get a meagre performance by adding a countershaft and slowing her road speed.
Several previous owners had given up in despair .She has never wanted to revup more than about 200 revs
. Eric vastly increased the size of the exhaust lines now they are 3/4 copper to a 3/8 Blast nozzle, but that did not do much.One piston came loose about 8 yrs ago and while the cylinders were off I opened up the passages from the 2 drilled 1/4 inch holes to the1/4 by 3/4 filed out oval she now has.
As the motionworks are under the platform and she has a vertical fire tube boiler I added a superheater coil last summer. That gives about 100 degrees F of superheat. Doing that stopped the damp spray that had always covered the driver previously but did nothing noticeable for performance.
To do the same test run as some of our other models, mostly 2 inch scale traction engines, she uses about twice as much coal and water as any other.
The valve gear is all in the enclosed. welded closed, crankcase. Apparently it is a version of Greenly/Joy corrected gear, which seems reasonably successful in 2 inch scale models. However maybe the builder made changes which spoil it. I am 70 now and hope that I do not have to literally build a new engine. Regards David Powell and Eric Motton.
Top

The valve gear inside a welded enclosure??? Sacrilege!!
I'd look in there...
RussN
Top

We long ago cut a hole and looked ! But thats all we can do short of major surgery. The connecting rods are massive, as are the balance weights. We need a 4 inch tall mechanic with the strength of a Samson to climb in to dismantle or adjust anything !!! David and Eric.
Top

If you are wondering what dad's blathering about: 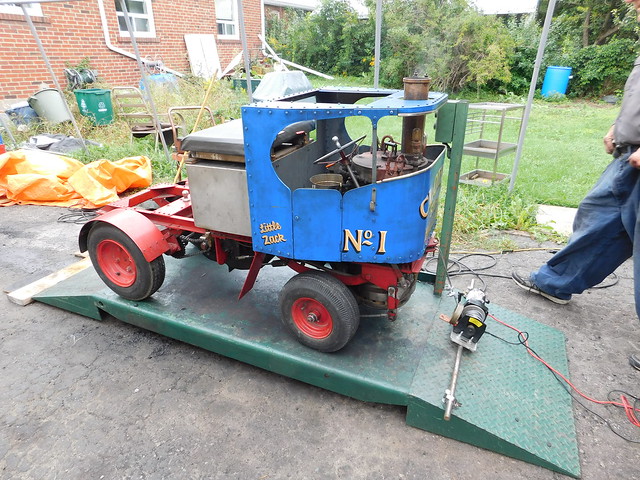 I drove it shortly after purchase, and thought it was a dog. It was horrid to steer, and had a slight lack of performance in comparison to the 4" DCC (That's Double Crank Compound, not Digital Command Control).

Now I see what your problem is!
No rails...
RussN
Top

Well, serious looking at has been undertaken with the motionworks sitting on a bench in the garden. The first thing noticed was that the pistons vitually completely blocked the steam passages at each dead centre. To cure that the end covers will be remachined and recesses formed to allow the steam, and more importantly the exhaust to " Go round the corner" so to speak, The second thing noticed was that the valves did not start to open to steam until the pistons were about 1/4 inch travel after dead centres As we cannot alter the timing we shortened the valves until they open just about at dead centres. Now the valves slightly overtravel the inside edges of the ports and we get about 85 % cutoff in full gear. The valve gear seems to notch up reasonably when looked at but the only real test will be undef steam. Regards David Powell.
Top

That's pretty neat, where are you guys located? I am surprised that these or traction isn't a lot more popular over here in the USA. When I started my locomotive I lived in the same town as the live steam club. Today i am about 1.5hrs from the nearest club. I am starting to think my next project will be either a steam boat or a large scale Foden truck. Far more places to run steam when you don't need to mess with track!
Top

HI, I live in Toronto, James lives on Vancouver Island. James has our 4 inch scale Fowler Traction engine, It is licensed and insured for road use. The smaller model traction engines seem to come broadly within the definition of personal assistive devices and need no licence etc, The Clayton falls between in size and capability. I play on quiet suburban side roads. Between us we belong to a number of steam and rail groups and our models ( Some road some rail )usually attend many events each year. I run a big pick up truck and trailer and attend events within about a 3 hr drive from home. Fortunately I have a very enthuiastic and supportive wife and a few good friends who help and often drive our models as I am somewhat disabled. Regards David Powell
Top
Post Reply
10 posts • Page 1 of 1