Dick:
Your almost-neighboring states of Washington and Oregon both follow Washington's rules, so:
150 psi max operating pressure, with quality hobby safety valves are the norm.
Come on down!

and is not a power boiler anything over 100 PSI ?
or is that a local code?
Too many things going on to bother listing them.
Top

I suspect that is a variable definition based on the accumulating facts in this thread.
RussN
Top

Under Alaska law, if a boiler doesn't fall into this or another exemption (low pressure heating boiler, historic etc.), it's a power boiler. (Historic boilers have some special requirements.) In other places the definition is apparently different. In the case of miniature boilers, the law givith and the regulations taketh away. I don't have a current copy of the ASME standard, but I believe a boiler subject to their standard over 100 psi mawp is a power boiler and that's where Alaska got their definition.
Top

A miniature boiler is a boiler built to Part PMB of ASME section 1. This part has special rules for boilers that are less than
16 inch inside diameter , 20 square feet of heating surface, 5 cubic feet of volume, and 100 psig pressure.
Part PMB is the only place where a limit of 100 psig is mentioned in the ASME Boiler & Pressure Vessel Code.
Top

ah...so my memory is not totally defective...it is in the ASME book..

Too many things going on to bother listing them.
Top

Thinking logically about this, I can see where it would be FAR easier to overpressure a miniature (live steamer) boiler during a hydro than on a full-sized loco. I would think the pumps used to test a big boiler are not 512 times the capacity (8 X 8 X

of a typical model pump. A few extra pump cycles in our world could be disasterous, but hardly even detectable in that big boiler
Top

Absolutely.true. one stroke of a pump is all it needs.

Good reason for a little bit of air in the boiler while doing a hydro..or a safety valve set at an appropriate pressure
Too many things going on to bother listing them.
Top

Unless you have managed to get all the air out, on a fairly small boiler (like say, a tich boiler...), then usually it will take more than one stroke to take the boiler from under operating to in excess of 1.5 operating.

I would recommend not gagging safety valves for 1x testing- just press the boiler to operating pressure. Listen to the boiler as it is squeezed too- it's not just a visual test.

I would go with 1x hydro at every time that fittings are worked on (because you don't have to change safety valves to do it in a model). 1.5x is dependent on state/province/insurance rules. I remember VIME as being 1.5x. Typically, that is not going to find a boiler that is in need of work- usually a 1x will do that just as well.

My Dad has been involved in one boiler that failed in service- perhaps the owner of it would care to share the power point ? It was a 3.5" loco where a stay tore away from the firebox outer, copper boiler, with likely insufficent silver solder penetration). Said boiler had been hydro'd fairly shortly before failure.

The key to boiler inspection, as outlined, is always the visual. We have a condemned boiler here at work due to stupid. It's easy to _see_ why the boiler is condemned, (I'll post photos when I get home, I just took a couple...). That being said, a good visual inspection of the boiler will likely tell more than tools, or hydro'ing the boiler will. Endscopes are dirt cheap now- I have a pair of them. Generally, they are available for $200 or so...in Canadian kopecks (or Canadian Tire Money...)

PS: Dick Morris, BC is exempt at 2m^2, so you can bring a steamer through BC, stop at 3 (or more) tracks on your way to WA, and run

. Club rules generally are (as mentioned ^) for a hydro due to insurance provider rules. However, there is no _legal_ requirement for an inspection in BC.
Top

I carry soft seat safety valves with me that are set at 10 psi over hydro pressure. They are dirt cheap.. get them for air compressors.

Out come the running safeties..in go the test valves.

Cheap insurance against....fill in the blank
Too many things going on to bother listing them.
Top 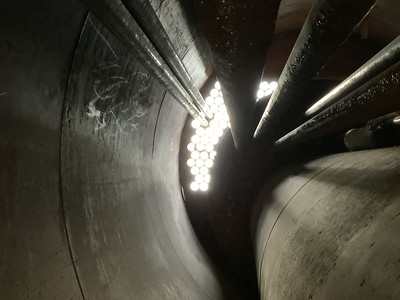 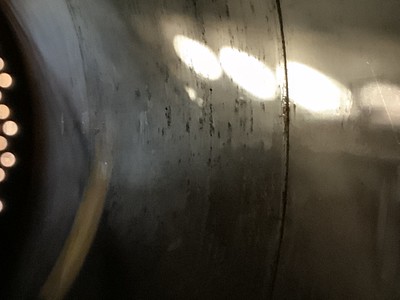 This is a 600 HP, type CB boiler by Cleaver Brooks, about 20 years of steaming, failed due to stupid. Note where the corrosion is, in relation to the N water line...about 2' _below_ the N waterline. The boiler sat with water in it after suffering leaking tubes. The tubes which are still in it, they are replacements. They put in 22 tubes, then decided that a full inspection would be needed. $ became a problem (yes, even for the government- more priority of money) and the previous Chief Engineer basically abandoned the boiler with water in the boiler. Predictably, the boiler corroded at the waterline, where the water (in contact with air) etched a bunch of potholes in the metal. This means that the provincial inspector has failed the boiler due to being too thin in the shell. The inspector will approve operation on a 2 year basis, with flue removal to reinspect the potholes, which makes no real sense.
Top
Post Reply
48 posts