Russ, the only thing I can remember about Woodinville trains in the era you mention was an old time small family theme park located down near the Hollywood hills school house, in what is now the Wine County District. I saw a news paper article recently about the steam loco and consist the owner operated around his property. Don’t remember it being a saddle tank steamer though.

Harlock likely knows how this present Davenport came to be, as he recently made a video of the new engine. Also, you could try comm7nicating directly with the owner, and see if he will fill us all in on the details.

Sounds like this one is a Davenport, although Baldwin did make quite a few saddle tank 60CM trench engines for service in France, as did Hunslet and a couple of other smaller British locomotive works. Baldwin’s and Hunslets where the two most common styles of locomotive used by the U.K. War Department Railway service. The Hunslets were the better design, apparently, as the Baldwins were slightly to wide and had the annoying habit of tipping over on un even track, when the side tanks were out of balance, due to water flowing across the frame, into the lower tank.

Iam not aware of ay 1.5” scale trench engines built for the 100year commemorative, how ever there are a number of Hunslets in the hobby, which are the same as some of the trench engine styles. Also, havent seen an 2-6-2 saddle tank trench engine, although would very much like to.

Some years ago I asked George Hoke why he thought no one was much interested in modeling WW1 trench engines. He thought the war and the causalities were so horrific, that no one from the era wanted to be reminded of it, or relive those days. George was even hesitant to reply to my questions. Very sobering.

On the bright side, the U.K. and US Railway Battalions we’re credited with helping win the conflict, as the trench railways moved all the material, supplies and casualties in and out of the trenches throughout the war; Up to 1 million tons a month of artillery shells, ammunition, Dunage, food, water. After the armistice, The two US Railway regiments, 14th and 21st Engineers returned home after three years operating at the Front, having never lost a man in Battle. I am glad the Mosely Trust sponsored their “Tracks to the Trenches” commemoratives. From all reports they did a fine job of restoration, and demonstrating Railway operating conditions at the front.

Museum is closed for COVID, but this engine has a great spot in the field under cover. Took some dimensions and detail pics.

Missing the air compressor and someone smashed the windows out late last year, but otherwise fairly accessible and untouched. I keep thinking this would make a great 3 1/2” gauge project... 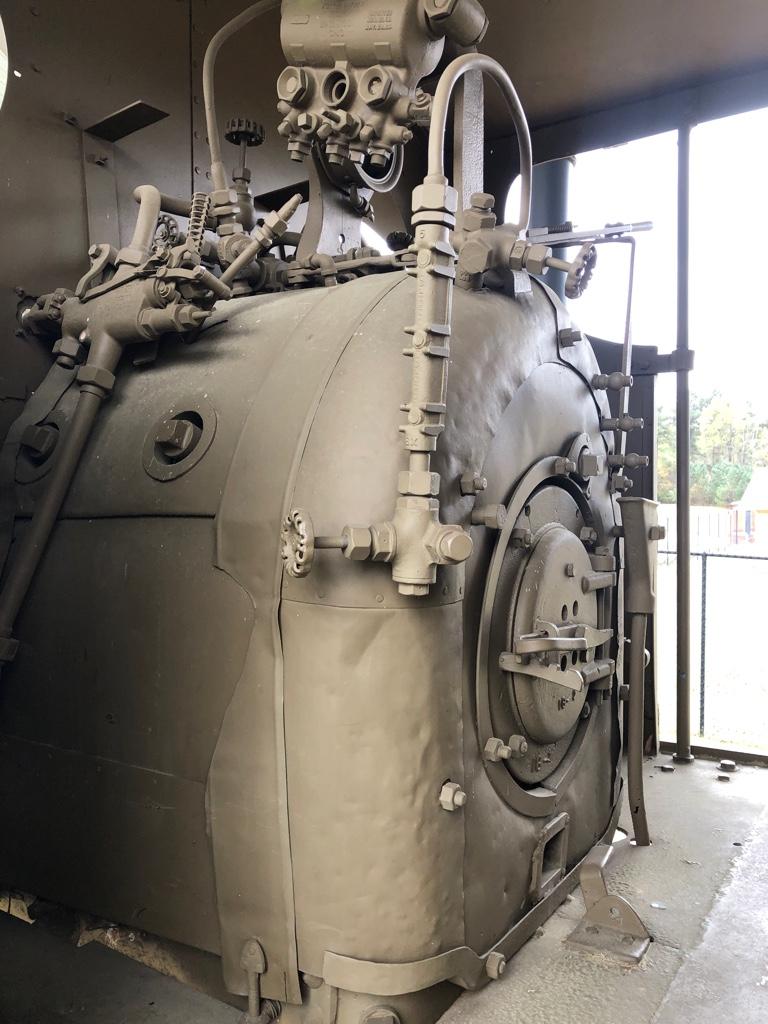 Thunderskunk. Thanks for posting the pictures. I can’t remember, is this a Baldwin? And any idea, did it serve in France?

I think I remember reading somewhere that this one did not make it overseas, gosh might have even been Wikipedia. Front plate says “Davenport” though I can’t guarantee that’s accurate.

Oh gosh it’s written on that board, second to last paragraph. Yep, this was an engine that never made it over. Kinda cool, “Hook Range” which is on that map is still there. I just shot a match today one over from it.
"We'll cross that bridge once we realize nobody ever built one."
Top

Ah yes, Memories! I was a full time resident of the “Benning School For Boys” for a time in 1968. The Infantry Officer Candidate School. We didn’t have any free time then, between training 12 hours per day, and running, and low crawling, in mass formation, endlessly around the mile and a half airborne loop at night, for the recreation of our Tactical Officers. But one memory still surprises me a bit. That being the importance of the mysterious 60CM railway that still existed around large parts of the base then. We never knew much about it, but for some reason, it still loomed as an important feature of base life, even then. Never really knew why at the time. But makes sense now. For 50 or 60 years, starting during WW1, railway transport was THE key to American military theater deployment and resupply, and Victory! I guess the old timers, still serving at Benning in the 60’s, retained deep memories of that earlier era. Glad to see the old loco has been preserved, and that era is still on display.
Moderator - Grand Scale Forum

OCS in the 60s... I can’t imagine. I finished OCS in 2015, and I’m still a bit mentally scarred. I think they stopped having specific branch OCS classes around 2010, and there’s a few different course formats. Thus I didn’t complete it at Fort Benning, but it still kicked my butt.

Y’know I remember the recruiter coming over for dinner when my step brother joined, and me being a train-obsessed 10 year old he mentioned I’d need to be an officer to be an engineer. Now I’m an engineering officer... D### recruiters.

I think I read somewhere the Army was operating a steam locomotive into the 80s at a schoolhouse. Pretty sure we’ve wrapped up all railroading at this point and it’s all subcontracted.

Railhead is kind of cool though.

Glenn Brooks wrote:...for the recreation of our Tactical Officers...

This caught my eye... interesting. They still call them TAC officers, but they made it into an acronym; train, assess, council or something. It’s interesting because there’s a lot of that in OCS. There’s always battles between keeping traditions and “political correctness” for lack of better words, and I think this is a bit of evidence showing this school’s resistant to that bull crud. Somebody in TRADOC probably said “you can’t call them tactical officers because bla bla bla,” so they went ahead and made an acronym. They still wear black hats despite similar jaw flappings, and they still made us low crawl excessive distances (it’s called practicing individual movement techniques now, haha).
"We'll cross that bridge once we realize nobody ever built one."
Top

Where did you go for OCS? In those days I think everybody went off to the infantry school for OCS and then afterwards, on to a separate branch school somewhere else, except for the combat engineers. They might have had their own OCS program at Belvore. I’ll have to talk to my cousin, who was an engineer there at the time. I think there where around 8 or 10 OCS companies in training at Benning, year round at the time. I just remember our barracks was one of many, and every two weeks one group would leave and another cycle would start up.

Ah yes, the “Counseling” part. We did get lots of counseling- grass drill, braced against the wall, ponchos in the shower with cold streaming water for illicit pizza, lots of loud, nose to nose instruction. Crazy times...

If I remember the history class, I think it flip-flopped a few times. Artillery may have had their own course on and off along with the engineers.

The national guard has two paths; when we send someone to the 16 week course, we call it accelerated. We also do a two year, four phase “drilling status” course referred to as traditional. I did phase zero and two in Vermont/New Hampshire at regional training institutes, phase one at Camp Edwards in Cape Cod, and phase three at Aberdeen Proving Grounds.

That all said and done, branched engineer and spent six months in lovely Fort Lost in the Woods Missouri.
"We'll cross that bridge once we realize nobody ever built one."
Top

I'm going a bit off topic but -