Discussion on all milling machines vertical & horizontal, including but not limited to Bridgeports, Hardinge, South Bend, Clausing, Van Norman, including imports.

Hi guys, I'm looking at buying a bench top milling machine. hobby use. I have a South Bend 9" lathe, 1938 in great shape.
I have been looking at the Precision Matthews 25 MV. any comments on those? Any other machines I shoule look at in the $2000 max price range?
Top

Have you looked at Grizzly's bench top mill offerings ?
What PM sells is essentially the same as what Grizzly sells, just a different paint job, model number and accouterments.
Top

Nice machine... until I saw where they put the Z axis wheel.
How on earth is one to make precision vertical movements cranking a dial next to ceiling while watching what happens at the end of the tool?
Just for that would be a no good for me.
Mauro Gaetano
in Austin TX
Top

I don't know what your situation, shop access or space requirements are, or where you are located and what the availability of machines is where you are, but here's my reaction: 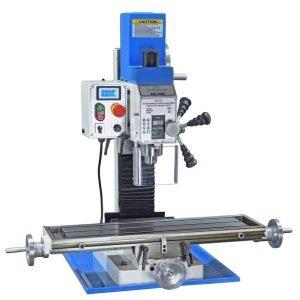 For $2000 you can probably find a nicely equipped Clausing mill. It's a small, floor-standing mill with more capability and it probably takes up less floor space than the bench you are going to put a mill-drill on. The Clausing is available as a vertical or horizontal, and you can mount a Bridgeport head on a horizontal and get both. There are other similar makes, like Rockwell. 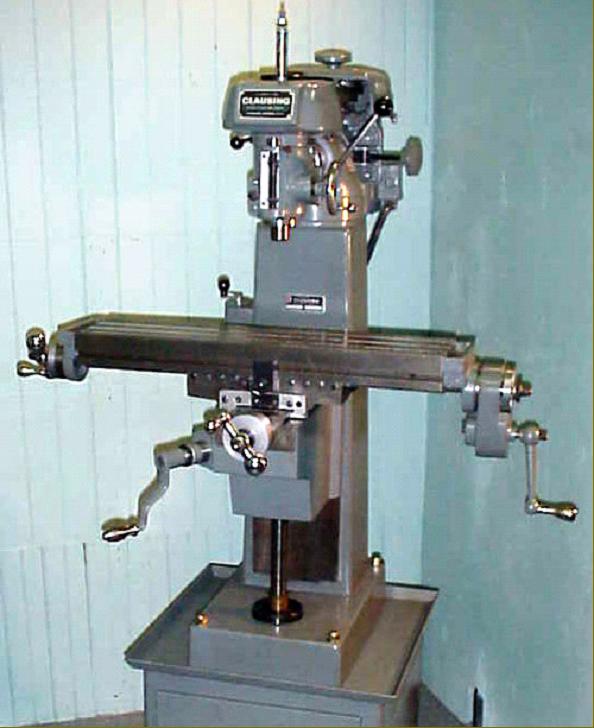 Keep in mind that if your $2,000 budget is the total to get you working, to price your mill, you need to deduct for a vise, clamping kit, collets, end mill holders and everything else you are going to need.

Many times, a used mill comes complete with all of the tooling.

tornitore45 wrote: ↑
Sun Feb 03, 2019 6:35 pm
Nice machine... until I saw where they put the Z axis wheel.
How on earth is one to make precision vertical movements cranking a dial next to ceiling while watching what happens at the end of the tool?
Just for that would be a no good for me.

Keep in mind it's a smallish mill, the head travel is 13 inches, so I'd guess that z axis hand wheel is about 25 to 30 inches from the base.
Top

It's funny, I noticed the wheel being up there sort of high, but having never used one, I don't know why I noticed. It just looked out of place.
In a comparison thing I saw the PM looked a little better built than the grizzly???? but the grizzly was cheaper, but then the PM had a longer warranty. I don't know.
that certainly looks like a nice mill in the photo. space is some issue. I'm in Houston and I don't see much used stuff come up anywhere near here. I'm not driving to the east coast for a used mill. I'm not in a big hurry and will keep looking around for awhile.
I bought a south bend lathe with no tooling, so I do understand the cost of just being able to do anything.
And truthfully, I'm just playing around, I don't even know what I'm going to do with it. but I have used the lathe a bit. I'm a furniture maker but I 've been playing with metal work more over the years. It's getting to where I barely lift plywood onto the saw anymore.
Top

And truthfully, I'm just playing around, I don't even know what I'm going to do with it.

I bought my machine for making models for hobby BUT

Is funny how the access to a machine shop, all tooled up and ready for action creates a lot of home projects that suddenly one feels empowered to do and do it right.
Wobbly barbecue wheels? No problem make new shafts that go through the square pipe leg.
Long arm shower head cantilevered pose too much stress on the fitting? Build Stainless Steel bracket.
Wife burned the range knob? No problem make a replacement in Derlin.
Wife wants to punch 100 1 1/4 cardboard disk? Sharpen the end of a pipe and make a wood plug for the other end.
I could go on, the presence of machinery creates its own justification.
Mauro Gaetano
in Austin TX
Top

Indeed!
Owning machine tools opens a whole new window of opportunity, limited only by one's imagination.
As an example, years ago my ex wife procured a recipe for whole wheat bread, which includes grinding the wheat. To that end, a hand wheat grinder was procured. I have been enjoying that whole wheat bread for more than 45 years now, and no longer hand crank the wheat grinder. I'm pleased to report that the ex wife is no longer in the picture, and the new wife, who has been a model of excellence, picked up the bread making.

Turning a wheat grinder by hand isn't hard, but doing any function for ten minutes or longer, by hand, gets tiresome, especially as one ages, as I've done. But there was a solution at hand. My lathe!

Several years ago I converted the hand grinder to being powered by my Graziano Sag 12. The grinder was crudely machined, and didn't run well, as it generated some serious wobble. Then, one day, the poorly machined auger broke (cast iron, tin plated). That afforded the opportunity to rebuild the grinder, which I did, including making a new auger. I had to compromise on the lead, but the three pitch that I could generate has provided perfectly adequate operation for many years now, and it also allowed for correcting machining errors, so the grinder now operates without issue.

Here's a picture of the auger I made to replace the broken one:

Curious about the color? It's made of 17-4PH stainless, hardened to an H900 condition. The blue color is due to oxidation.

Bottom line is that having machine tools opens all kinds of doors ------- the ability to create or repair items that, otherwise, might have to be discarded.

Harold_V wrote: ↑
Mon Feb 04, 2019 4:45 pm
Bottom line is that having machine tools opens all kinds of doors ------- the ability to create or repair items that, otherwise, might have to be discarded.

Repair:
Our 38 year-old front door latch mechanism just got some R&R in my machine shop.
The latch itself was worn until pushing it all the way down barely unlatched the door.
I took it apart and discovered the bronze latch had a replaceable steel button that was worn down!
I turned a new button from W-1 drill rod, installed it on the latch, and reassembled the mechanism.
The front door latch now works like new.

Have machine tools: Will build.
Get yours now...
~RN
Top

Thanks for the stories guys, I have had a cabinet shop in my backyard for years so I know exactly what you mean. wife says I need a little table behind the sofa so I can put a drink there, A day later, one appears.
this is exactly why I "need" a milling machine. lol
Top
Post Reply
43 posts